Copyright: © 2015 Li YG, et al. This is an open-access article distributed under the terms of the Creative Commons Attribution License, which permits unrestricted use, distribution, and reproduction in any medium, provided the original author and source are credited.

Synovial Chondromatosis (also called Synovial Osteochondromatosis) is a rare benign joint disease caused by synovial cartilage metaplasia, the etiology remains unknown and the disease is characterized by the formation of cartilaginous nodules in the synovium. Calcification or ossification can occur at a late stage of the disease. A 48-year-old Chinese woman presented to out-patient department complaining of recurrent and progressively worsening right knee pain, swelling and stiffness after a minor contusion 4 years ago. She underwent careful preoperative imaging and planning followed by a two-stage arthroscopic and open surgery (combined anterior and posterior approaches). Histopathological examination of the specimens confirmed our suspected diagnosis of Synovial Chondromatosis. 15 months after surgery, she has regained full range of movement, but continues to experience residual insidious knee pain when standing for a long time. Synovial chondromatosis is a rare proliferative disorder that causes pain, swelling, and restriction of movement to the joints it affects. It low incidence rate and differential diagnosis makes it sometimes difficult to diagnose, reason why adequate radiology imaging and arthroscopic exploration are decisive for the diagnosis. Surgical lavage and excision have proven to be the reasonable and preferable course of treatment of synovial chondromatosis.

Synovial chondromatosis (SC) or synovial osteochondromatosis is a benign metaplastic proliferative disorder of the synovium which affects sub intimal fibroblasts in synovial joints, tendons and bursa [1]. Synovial chondromatosis can be classified as primary, when an idiopathic benign neoplastic process occurs in an otherwise normal joint and secondary when there is metaplasia of synovial tissue in to cartilaginous tissue without cytogenetic aberrations in a degenerating joint [1,2]. It can also be classified as generalized when the disease is diffused in multiple compartment of the joint ,and localized when it affects a specific spot [3]. SC is characterized by the formation of multiple cartilaginous nodules and usually lead to chronic pain, recurrent swelling ,soft tissue crepitus ,palpable loose bodies and limit the function of involved joints [4]. The true etiology remains unknown, but the metaplastic theory is the most favored. Although the disease affects almost any synovial joint, it most frequently involves the knee joint, followed by, in no specific order, shoulders, hips, and elbows [1,3,4]. The diagnosis of SC can be difficult, especially for an out-patient, not only because of his extremely low incidence, but also because of it similarities with other forms of synovial proliferation. The diagnosis is generally suspected clinically after radiologic examinations and confirmed by biopsy of the excised specimens.

The study protocol was approved by the institutional ethic committee of our institution. Informed consent has been obtained from the patient and her single daughter for the report of this case.

A 48-year-old countryside Chinese woman presented with a history of progressively worsening right knee pain with associated swelling, and stiffness for the past three months after she has been suffering from recurrent wild right knee pain since she endured a knee contusion 4 years ago. The pain was present at rest, and worsened when bearing weight, thus restricting her daily activities. She denied any symptomatic night pain, locking, or a giving way of the knee. After the accident she suffered of pain and swollen right knee, presented to her local hospital where she had a puncture and drainage of the knee. X ray was negative. She was then put on NSAIDs, which helped to relief symptoms at the time. When the symptoms started worsening the patient went back to the local Hospital and had a MRI (1 month before surgery) of the injured knee, MRI (Figure 1) showed existence of lateral meniscus injury, synovial thickening, important effusion, multiple intra-articular loose bodies, and large trifle high signal clumps in the popliteal fossa .The radiologist suspected a Pigmented Villonodullar Synovitis (PVNS). Knee X-ray (Figure 2) at our Hospital revealed a degenerative knee, with no evidence of calcification, ossification or loose bodies. Physical examination revealed a marked effusion around the knee with a visibly swollen popliteal fossa, obvious knee line tenderness, with a range of motion (ROM) of just 20 to 80°. 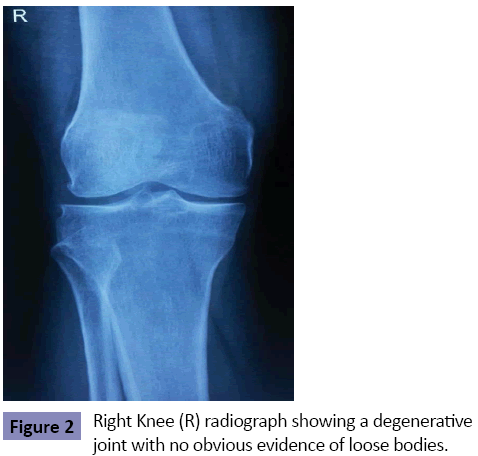 Popliteal fossa ultrasound showed an avascular mass anterior to the popliteal artery, a size of 4.4 cm × 2.6 cm × 3.6 cm, well circumscribed, irregular morphology, with punctuated signals on the inside. The patient’s blood tests, ECG and chest radiographs revealed no abnormalities. Based on the patient’s history, physical examination and radiological findings, we suspected a right knee synovial chondromatosis, reason why at first we planned to perform an excision of the loose bodies and sinovectomy under arthroscopy.

Arthroscopic exploration was performed using the conventional anteromedial and anterolateral portals, which permitted to notice numerous (thousands, 2-3 mm large) cartilaginous granular nodules in the joint cavity (Figure 3), wild chondral cartilage damage, grade III OA of the knee and a damage lateral meniscus. The med   al meniscus and the cruciate ligaments were normal. Debridement and removal of granular nodules under arthroscopy using the shaver was performed. During the procedure, we realized that the nodules were disseminated all around the joint cavity, the anteromedial and anterolateral portals were not enough to completely remove the granular loose bodies, so we decided to create an extra posteromedial portal which served to remove the granular loose bodies present in the posteromedial and poster lateral compartment of the joint. Debridement of the loose bodies under arthroscopy using the shaver was not convenient because of the large amount of the nodules, and resection of the popliteus mass under arthroscopy was not possible, so we decided to continue the surgery using a combined anterior and posterior open procedures to make sure all the granular loose bodies were removed and masses excised. The patient was kept in a supine position with the tourniquet around the proximal thigh, the knee joint was exposed with a 15 cm median skin incision and medial parapatellar capsulotomy was performed, multiple tiny cartilaginous loose bodies were found in the joint cavity and where completely removed during debridement, sinovectomy of the anterior compartment and the anterolateral ditch was then performed. During the procedure, two ossific masses were excised from the anterior compartment of the joint cavity (Figures 4a and 4b) respectively located in the sub patellar bursa and infrapatellar fat pad. After draining the knee, sewing and dressing the wound, the patient was moved into a prone position; the posterior compartment of the knee joint was then exposed. 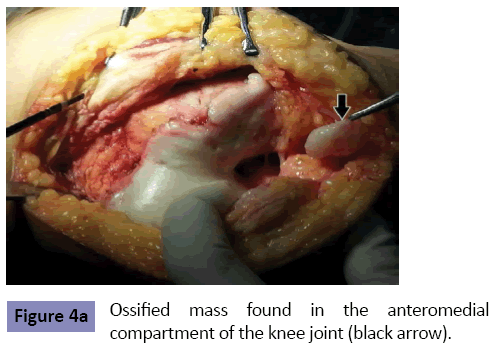 Figure 4a: Ossified mass found in the anteromedial compartment of the knee joint (black arrow). A large membranous mass filled with cartilaginous granular nodule was found medially to the popliteal artery (Figure 4b). After cystectomy of the mass and careful debridement of the posterior compartment of the knee, all excised synovium, loose bodies and masses were sent for biopsy. 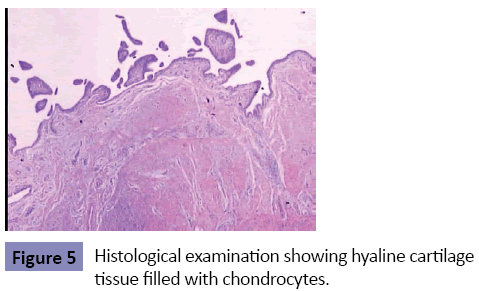 24 hours after surgery, the drainage tube was removed, no remaining loose bodies were found in the drained liquid, the patient was then ordered to start daily self-administrated functional training, focusing on reinforcement of quadriceps and hamstring muscles and active range of motion exercises. From the third day following surgery, the patient was allowed weight bearing with the help of crutches.

Fifteen (15) months after surgery the patient has regained full range of motion, with no joint line tenderness, she is back to her previous daily activities but still occasionally complains of back knee pain when standing for a long time.

Synovial chondromatosis is a benign, slowly progressive condition which can lead to disastrous consequences when misdiagnosed or not properly treated. Given the patient age, history and results of radiological, physical and arthroscopic examinations, the present case appear to involve disseminated synovial chondromatosis extending into the popliteal fossa. We believe that the popliteal mass found in the posterior compartment of the knee of the patient was initially a baker cyst which got filled by migrant intraarticular cartilageous loose bodies and within the evolution of the disease turned into a large mass. This certainly raises concerns about a possible transformation into synovial chondrosarcoma, but in this case histopathological examination after surgery confirmed the diagnosis of SC. However, there are few reports [5-7] in the literature about malignancy transformation of SC and all of these reports have pointed recurrent and long-standing cases as key factors of this transformation. The diagnosis of some cases of synovial chondromatosis can be very challenging and misdiagnose might occur. In the present report the radiologist at the countryside hospital based on MRI findings suspected a VPNS. Chondral damage and the existence of cartilaginous intraarticular nodules due to cartilage metaplasia were the main reasons why we suspected SC instead. In our knowledge, there is only one report of combined PVNS and SC of the knee in the literature by Siddharth Shetty [8]. The treatment of SC remains controversial. In the present report, a first stage arthroscopic examination was performed to have a gross morphology of the joint cavity, which helped to confirm the suspected diagnosis and to remove a good amount of granular cartilageous nodules. A second stage of combined anterior and posterior open procedure was then performed to completely eradicate the disease. Mackenzie et al. [9] Also reported a two-stage arthroscopic and open procedure as a successful treatment for intra-articular and extra-articular SC. Singh et al. [10]. implied that with careful clinical assessment and pre-operative planning, a one stage open anterior and posterior radical synovectomy of the knee in a one-step procedure instituted successfully for cure of extensive synovial chondromatosis. The question here is, is radical synovectomy really necessary? For our case we only performed a synovectomy of the affected synovium and till date the result is very satisfying, the patient has gain back full range of motion and only complaint of wild pain when bearing weight for a long period of time. Contrarily to these above reports , other authors [11-13] recommended a one-step arthroscopic surgery for the treatment of SC of the knee, but more recent reports from Kyung et al. [14] and Jesalpura et al. [15] Implies that with the use the appropriate portals, a one-step arthroscopic surgery would only be enough to treat localized SC of the knee.

Beside surgical intervention, a study from Chong et al. [16] demonstrated the effectiveness of postoperative radiotherapy for the treatment of recurrent SC of the knee in a male patient and implies that radiotherapy might be a solution for knee SC, but farther studies with higher level of evidence are needed to support this hypothesis. The present report is second in the literature after Singh [10] reporting a disseminated case of SC characterized by the presence of multiple cartilaginous granular nodule in the joint cavity. This report emphasis the importance of careful preoperative examinations, the necessity of arthroscopic examination since the diagnosis of knee SC is not always obvious on radiological examinations, and the importance of complete removal of the loose bodies and total excision of the affected synovium but not necessarily a radical sinovectomy, this might shortened the recovery time given the importance of healthy synovium for the knee function.

Informed consent has been obtained from the patient and her single daughter for the report of this case.