The Motor Branch of the Median Nerve, a Rare Localization of Schwannoma

Copyright: © 2016 Slimane K, et al. This is an open-access article distributed under the terms of the Creative Commons Attribution License,which permits unrestricted use, distribution, and reproduction in any medium, provided the original author and source are credited.

Schwannoma is the most common benign tumor of peripheral nerve. Only 7% of schwannomas arise from the median nerve, and its localization in the motor branch is extremely rare. A 57-year old right-handed female presented with a carpal tunnel syndrome symptoms associated to a little painful thenar swelling in the left hand with no motor or sensory deficit. An electromyogram confirmed the clinical diagnosis of carpal tunnel syndrome. Ultrasonography (US), performed to study the thenar swelling, revealed an infracentimetric avascular well-limited intramuscular mass. Surgical resection of the mass was performed satisfactorily with preservation of nerve fascicles. Histopathology concluded to a benign schwannoma of the motor branch of the median nerve. In the literature reviewed by us, this is the third case of motor branch of the median nerve schwannoma.

Schwannoma, also called neurilemmoma, is the most frequent benign tumor of the peripheral nerves. It arises from Schwann cells of the nerve sheath. Clinical diagnosis is not always obvious and its non-specific symptoms may lead to a misguided diagnosis, especially when a common hand or wrist pathology is associated. We report a case of schwannoma developing in the motor branch of the median nerve associated to a carpal tunnel syndrome.

The patient is a 57-year old right-handed woman, with no relevant family or personal history. She presented with a 2- year history of numbness and tingling of both hands, especially noted at night, with a recent weakness of the right hand and pain in the thenar eminence of the left one without motor weakness in the movement of thumb. Physical examination revealed positive Tinel’s test and Phalen’s sign and a painful little solid mass 0.5 cm in the left thenar eminence.

The clinical diagnosis of carpal tunnel syndrome was confirmed by an electromyogram of both upper limbs. Ultrasonography (US) (Figure 1), performed to study the thenar swelling, revealed an avascular well-limited intramuscular mass, communicating to the carpal tunnel by a fistula. 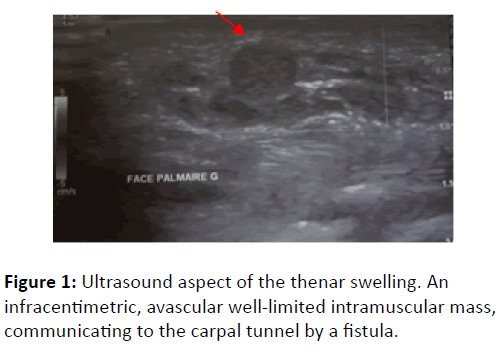 Figure 1: Ultrasound aspect of the thenar swelling. An infracentimetric, avascular well-limited intramuscular mass, communicating to the carpal tunnel by a fistula.

Under regional anesthesia and exsanguination with pneumatic tourniquet at the limb, the patient underwent open decompression of the left median nerve with release of the transverse carpal ligament and internal neurolysis. The same palmar incision was used to explore the thenar swelling. Dissection was performed under the radial bank of this incision and intramuscular dissection found a well encapsulated tumor which was intimately associated to the motor branch of the median nerve (Figure 2). Under the 2.5X magnifying loupes, the tumor seems to not involve the fascicles, with the nerve branch being compressed. Microsurgical intracapsular dissection was performed satisfactorily and the mass was marginally resected with preservation of nerve fascicles. A histopathological study concluded to a benign schwannoma of the motor branch of the median nerve. 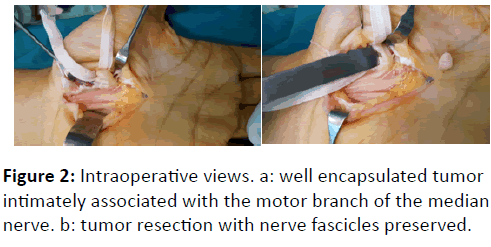 At 4-month follow-up (Figure 3), the patient reports a total relief from the pain with no signs of complications; nevertheless, an ulterior clinical evaluation is necessary to ensure the absence of recurrence.

Figure 3: four-month follow-up: good opposition of the thumb with total regression of the pain.

A schwannoma is a benign neoplastic proliferation of Schwann cells of the nerve sheath [1]. Different body areas can be interested with a predilection for the head and neck area (45% of total schwannomas reported in the literature) [2]. In the extremities, any of the peripheral nerves can be involved but it seems that the peroneal and ulnar nerves are the most frequently affected.

Grossly, it is a solitary, well-circumscribed fusiforme mass, eccentric to and separate from the adjacent nerve but encapsulated within the perineurium. It can rarely be plexiform [1]. Few cases of multiple schwannomas affecting the same nerve or the same limb have been reported [1,5-7].

Generally, the slow growth pattern of schwannoma allows for adaptation of the nerve fascicles to pressure effects, resulting in a normal motor function, mainly in the first stages. If motor impairment is present, a malignant progression should be highly suspected [9].

Schwannoma can be asymptomatic for long time. But when it arises distal to the wrist, pain becomes the most common symptom with possible paresthesia and hypoanesthesia [8].

In our case, the shared symptoms between schwannoma and carpal tunnel syndrome did not help us to develop the right preoperative diagnostic presumption and ultrasonography was not of great help. Magnetic resonance imaging (MRI) is often indicated to study such masses but it seems that it is not of much help since it cannot reliably distinguish between schwannoma, neurofibroma and malignant peripheralnerve sheath tumors [10].

In our case, like in classic schwannomas, there was a plane of cleavage and the mass was enucleated from the nerve with no damage to the fascicles. In the first case reported by Squarzina et al., this plane of cleavage was not identifiable and the resection sacrificed the motor branch [4].

We present the third case of motor branch of median nerve schwannoma. Preoperative diagnosis can be difficult and multiple differential diagnoses must be considered such as neurofibromatosis, lipofibromatosis, ganglia and soft tissue tumors. Ultrasonography is helpful to differentiate between solid and cystic masses and surgical resection has to preserve nerve fascicles where it’s possible mainly when a motor branch is involved.