Diagnostic Analysis of Spondylodiscitis in Guadalajara, Mexico: Are We Doing it Right?

Copyright: © 2018 Cobar-Bustamante AE, et al. This is an open-access article distributed under the terms of the Creative Commons Attribution License, which permits unrestricted use, distribution, and reproduction in any medium, provided the original author and source are credited.

Spondylodiscitis is a frequent diagnosis in developing countries and has a huge impact on healthcare programs. This disease can cause spinal instability and compression of neurological structures as well as it can develop asymptomatically. Risk factors have been described in the literature but to our knowledge this is the first demographic report from Guadalajara, Jalisco done in a Spine Center. Risk factors, most frequent segments involved, clinical presentation and common surgical findings were identified and compared to previous reports. The present study aims to add valuable information to the literature for spine surgeons in developing countries to take into consideration in order to treat their patients.

Spondylodiscitis, an infectious disease of the spine, has been a debilitating condition known since ancient times [1]. Incidence of spondylodiscitis has risen due to augmented life expectancy, as well as a more frequent diagnosis and a significant increase in the incidence of risk factors in most populations [2].

Spondylodiscitis is an infection of the intervertebral disc, adjacent vertebral bodies and/or posterior arch, accounting for 3-4% of all cases of osteomyelitis. It has been found that spondylodiscitis accounts for 2-7% of pyogenic vertebral osteomyelitis, with an incidence of up to 1 in 100,000/yr [3]. In underdeveloped countries the incidence of this pathology varies between 1 in 100,000/yr and 1 in 250,000/yr [4]. Age distribution is bimodal (under 20 yrs old and in 50-70 yrs old) [5]. Spondylodiscitis is 1.5 to 3 times most frequently diagnosed in adult males [6]. Patients over 60 yrs of age have proven to be at higher risk for infection [7]. Despite recent advances in technology, spondylodiscitis can be misdiagnosed. Risk factors are mainly comorbidities of the host. Conditions such as HIV, neoplastic diseases, diabetes mellitus, and chronic kidney disease have a higher risk [8].

Nutrition is a determining factor affecting the presence of spinal infections. Obese patients, with a Body Mass Index (BMI) above 30 are especially prone to Spondylodiscitis [9]. Malnutrition can predispose to immunodeficiency, making these patients prone to infections. Smoking, alcohol abuse, and IV drug abusers are all risk factors [10]. Almost half of the cases of spondylodiscitis are associated with a distant infectious condition, resulting with hematogenous spread such as pulmonary tuberculosis in Pott´s disease. The exact incidence and prevalence of spinal tuberculosis in most parts of the world are not known. In countries with a high burden of pulmonary tuberculosis, the incidence is expected to be proportionately high. Approximately 10% of patients with extra-pulmonary tuberculosis have skeletal involvement [11,12]. Contiguous soft tissue infections can also result in spondylodiscitis [13]. Spinal surgery and other invasive procedures are risk factors for spondylodiscitis [14,15]. The final purpose of this article, is to examine a series of spondylodiscitis cases and identifying multiple risk factors, clinical and surgical findings in our population.

Institutional Review Board approval was obtained for this study. The surgical records were searched in a retrospective fashion to identify all spondylodiscitis cases treated from January 2015 to July 2016, aided by the hospitals software. After the records had been revised, an initial count of 91 cases was obtained, of which 68 were adequately classified and initially managed as true diskitis. Inclusion criteria: initial clinical and radiological findings of spondylodiscitis with an initial diagnostic impression of spondylodiscitis in the time frame mentioned, no pediatric cases were included (<16 yrs old), patients without history of spinal surgery or tumors, patients without high risk of spinal infections (HIV positive, IV drug abuse, previous infections, chronic kidney disease, diabetes mellitus, severe malnutrition and/or other immunodeficiency present in patient´s clinical history). Patient demographic and procedural information was obtained from these records and multiple factors were analyzed: age, gender, surgery date, surgical findings (abscesses), culture reports, time between initial diagnosis and treatment, spinal segment involved and accompanying comorbidities. The results were compared and measures of central tendency were applied. Also a literature search was conducted using the following electronic databases: PubMed, Cochrane library and ClincalKey. The keywords included ‘‘spinal tuberculosis’’, ‘‘thoracic and lumbar tuberculosis’’, ‘‘lumbar tuberculosis’’, ‘‘thoracic tuberculosis’’, "Spinal infections"; in order to obtain published statistical data that can was used as reference for our population.

The diagnosis is commonly made with a detailed clinical and radiological evaluation of the patient, even though microbiological studies might not be available or completed at the time, these were registered later in the case records when the reports were finalized [16]. Spinal infections can also be classified etiologically as pyogenic, parasitic, or granulomatous, with fungal and mycobacterium infections corresponding to the latter. In many cases, a specific causative microorganism remains unknown [17]. Staphylococcus aureus remains the most common in pyogenic spondylodiscitis, accounting for more than half of non-tuberculous cases [18]. Less pathogenic microorganisms can be the cause of an immunocompromised host. The diagnostic algorithm employed in our cohort was based on the hospitals guidelines established by the national social security institute.

68 cases of primary Spondylodiscitis were initially managed as such and the diagnostic flow chart was applied to each one, obtaining the following data. Gender: male 39 (57.3%), female 29 (42.6%).

In all of the patients studied there was a multidisciplinary team managing the patient, consisting of: Infectology, Geriatrics, Internal Medicine, Microbiology, Spine Surgery, Anesthesiology and Epidemiology; with whom a consensus was made to decide the ideal treatment for each patient. The most common etiological agent identified was Mycobacterium Tuberculosis (7), The second etiological agent were pyogenic infections–{mainly Staphylococcus Aureus}(7).

The most commonly identified cause following Staphylococcus Aureus were neoplastic (three were reported as metastasis of unknown primary tumor and one was multiple myeloma) (4). Most of the patients had no culture/biopsy results reported (50) and were treated as if they were infected by Mycobacterium Tuberculosis because of the high rate of false negative results that we manage after processing a sample (Table 1).

The average time between initial clinical impression and surgery were: 20.05 days; we attribute this to the diagnostic algorithm process that all patients are put through to determine the most likely cause and some exams in our hospital may take 1-2 weeks to be completed. The most common comorbidities associated were: Obesity (92%), Diabetes Mellitus (80%), Chronic Kidney Disease (34%), Immunological disorders (23%), Alcoholism (16%) and Hepatic Insufficiency (4%) (Table 2).

The most common surgery performed was a posterior fusion (40) with either postero-lateral fusion or PLIF, followed by tissue sample for cultures or biopsies (17), some of the case records did not have a detailed surgical procedure note and data could not be extracted (10), anterior fusion was done in most cervical and thoracic patients (7), vertebroplatsy was the least frequent procedure (3) (Figure 1). Only 9 patients had reported complications ranging from a misplaced screw (1) to surgical wound infection (7) and cage subsidence (1). The four patients that were reported as tumor lesions were lost to follow up because Oncology continued the treatment. 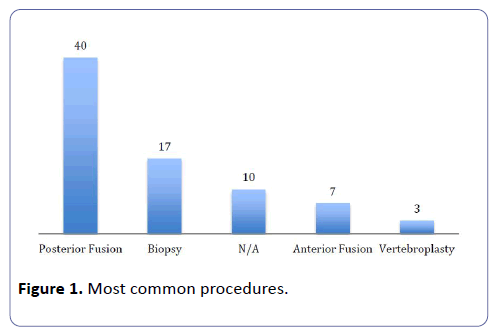 Primary spondylodiscitis is currently an important issue in Latin America. Our patient population consists of patients originating from a currently known endemic area. In recent literature the data corresponding to sex distribution is similar, being the male sex the one with a higher incidence of this disease (an incidence of 1.5-3 times higher than in females), although this distribution is not observed in patients below 20 yrs of age [6,19-21]. Although the expectations were to find a high incidence of Tuberculous spine infections in this patient population, we found that something more important, the lack of diagnostic confirmation due to the high incidence of false negative samples that are reported after sample analysis, which is deducted by the surrounding factors that these patients have (overcrowding in homes, exposure to smoke, comorbidities, chronic coughing, nocturnal fevers, among others), almost all of our patients were documented to suffer from a prior conditions that consists of a risk factor for spondylodiscitis, and that determines a least competent immune system. In a variety of references revised the peak incidence of presentation occurs in patients below 20 yrs and between 50 and 70 yrs of age, data that corresponds with our findings [22-26].

The spinal segment most frequently involved is the Lumbar segment closely followed by Thoracolumbar Junction; agreeing with current reports as the most common segments involved in these pathologies. Among the associated comorbidities, the most important are obesity and diabetes mellitus; these findings can be attributed to a poor micro-vascular blood flow, favoring the seeding of bacteria in the Batson’s Plexus evolving to a diskitis already described in the natural history of spinal infections pathologies. Although in highly developed countries Tuberculosis may be eradicated, it still remains the leading cause of spondylodiscitis in developing countries even though there is lack of documented culture reports in our experience, efforts are being made to control this disease and improve our patient registry. Spondylodiscitis accounts for 1-5% of all cases of documented infections by Mycobacterium Tuberculosis, and 50% of all articular and skeletal infections by the same agent [27]. However, in most of the revised recent literature, the most common ethological agent isolated for this pathology is Staphylococcus aureus [28,29]. Mycobacterium tuberculosis is considered a frequent cause for spondylodiscitis only in patients who are found to be immunosuppressed [30,31]. Pyogenic spondylodiscitis is most commonly caused by hematogenous spread [32]. The common organisms include Staphylococcus aureus and Streptococcus, in patients with a history of intravenous drug abuse Gram negative bacilli can be isolated [32]. The incidence of acute non-tuberculous vertebral osteomyelitis is estimated between 5-5.3 per millon patients/yr with a male predominance [33]. As reported in the general literature, in 37% of patients with pyogenic spondylodiscitis the there will not be an identifiable pathogenic microorganism [34]. It is important to note that almost all of the patients recorded had a previous condition affecting them, a factor that is determinant in the apparition and development of the spinal infection. Obesity has been related to the apparition of spondylodiscitis mainly in patients with a previous surgical procedure [9,35-37]. Some authors have stated that the risk of spondylodiscitis is higher in the presence of some comorbidities such as diabetes, malignant neoplasm and immunosuppression [38-40]. Other writers also include conditions such as advanced age, developmental delay, spinal trauma, smoking, intravenous catheters, malnutrition and patients with prolonged hospital stay [41,42]. The risk of a tuberculous spondylodiscitis is higher in patients who are infected with HIV, therefore its incidence its expected to rise in a near future [43]. Other risk factor for spondylodiscitis, that was not documented in our study, is having a previous surgical procedure on the affected segment, the incidence of postoperative spondylodiscitis ranges between 0.21-3.6%. [44-48] We believe that previous conditions such as obesity, Diabetes, Chronic renal disease and immunossuppresion should be taken in account as the most important risk factors for spondylodisicitis, and a possible cause for immunossuppresion in most patients. The areas of the spine affected in our population were shown in Table 3. In previous reports the data shows a similar distribution according to the affected area of the infection as showed in our study. Wisneski reported that the most common level of involvement is the lumbar spine, followed by the thoracic, cervical and sacral divisions [44] Sapico stated that the cervical spine was involved in 6.5% of spinal infections in comparison of the thoracic level that is involved in 35% of the cases [49]. Most surgeons in our hospital prefer the posterior approach, although when major deformities, abscesses or vertebral body destruction is encountered, anterior approach is preferred. In all of these patients there was a multidisciplinary team managing the treatment, consisting of: Infectology, Geriatrics, Internal Medicine, Microbiology, Spine Surgery, Anesthesiology and Epidemiology; with whom a consensus was made to decide the ideal treatment for each patient.

There is a high incidence of patients undergoing antibiotic treatment for tuberculous spondylodiscitis with culture-negative results (73%), being justified purely on clinical findings and risk factors in an “endemic” region. This can affect the epidemiological reports published in endemic categorized areas, and result as a confounding factor. The data presented should be taken into consideration in order avoid over-diagnosis of this pathology and grant the patient an adequate treatment. The risk factors found in our population are diseases that have been on the rise, this can elevate the incidence of spondylodiscitis in the upcoming years.

The authors have nothing to disclose.